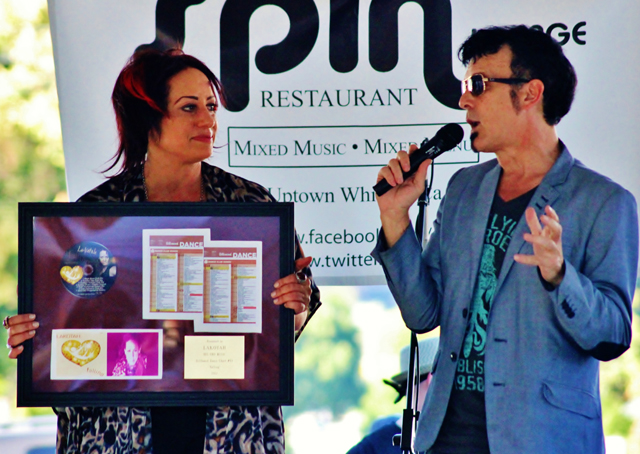 Lakotah To Appear On Network TV Show Welcome To The World

May 20, 2013 Hollywood, CA
2013 has been a great year so far for singer and recording artist Lakotah. Her debut solo single climbed the US Billboard Dance Music chart to the top 40s.

“Falling” climbed the US Billboard Dance Music Chart to reach the top 40s. Riding the wave of success, Lakotah accepted the invitation to appear on the National TV show “Welcome To The World” airing on the 24k Music Network starting June 17th. The network’s website will feature the interview as well starting Friday, June 21st. www.24kmusicnetwork.com

The show’s host, David Longoria is no stranger to Lakotah’s music. “She played the bass in my shows in concerts across the US and was a great addition to my TV Special Baila! which is airing now on PBS/Public TV stations all over the US”, Longoria says, adding “It’s exciting to follow her musical success form backing musician to front woman with her own hit song!”

Longoria presented an award to Lakotah at her live concert in Southern California recently. After this recognition Longoria asked Lakotah to join on the TV show for a continuation of her national success. Welcome To The World airs regularly on the network’s 450 affiliates across the US and Canada.

“We were excited to have Lakotah on the show and feature a glimpse of her personality, “says producer Robert Eibach.

This interview will coincide with the launch of her all new website in June. “My new website will be featuring my newest music as well as my daily twitter feeds, behind the scenes videos, my photo galleries and my schedule for live appearances and performances,” explains Lakotah.
The website is operational now at www.lakotahonline and will roll into the new fresh look and completion on June 17th.

Longoria and Lakotah taped the interview last week in Studio CIty, CA at the studios of the 24k Music Network.
“Lakotah shows her personal side and reveals a lot about her upbringing, and her music journey on the show,” says Longoria. “We had a good time taping the show and look forward to the audience’s enjoyment of it in June.”